Cult Following is a creative storycrafting card game. Each round two or three players are selected to be cultists. All the other players are designated as recruits. Cultists choose three ideas from a hand of five cards and creatively bind them together into a ridiculous cult. Recruits draw cards with questions and choose one to ask the cultists to help them figure out which cult to join. Each cultist takes a turn to answer. The recruit then picks their favorite answer and gives that cultist their question card, which represents a new follower that has joined that cult. The first cultist to reach two followers wins the round.

This game is about being creative and having fun with your friends. Use the ideas in the deck to come up with crazy stories, share them with each other, and try to convince everyone that your truth is the best.

Cult Following can be an adversarial game of combative role playing; it can take some time to warm up to being a cultist. Creating a cult can be challenging for new or shy players, so those players may choose to play as recruits for the first few rounds.

Do you like being the center of attention? Be a cultist.

Do you like hanging out with people who like to be the center of attention? Be a recruit. It’s ok, we can’t all be leaders.

A round of Cult Following has three phases: read the signs, form your cult, recruit your friends.

Cultists draw five “sign” cards. Signs are building blocks - things and ideas that are fundamentally important to your cult. Each card has two different ideas, or “signs”, on it, giving cultists ten signs to pick from. Cultists choose three signs, and may choose only one sign per card. They discard the other two cards.

In this game, Jasmine, Dave and Amber chose to be cultists, and Carl chooses to be a recruit. 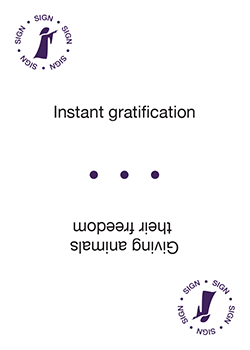 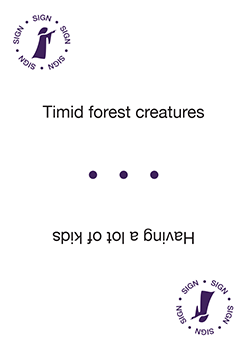 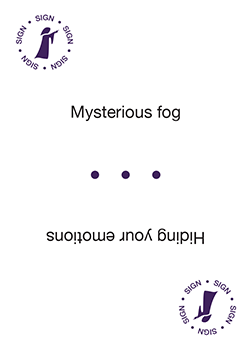 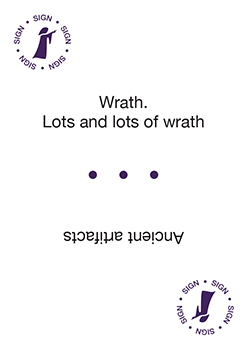 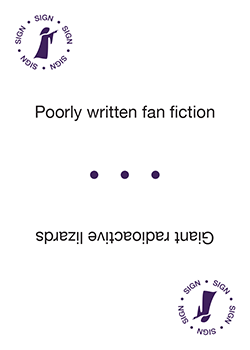 and decides to keep Timid forest creatures, Mysterious fog and Wrath. Lots and lots of wrath.

As a recruit, Carl draws one “question” card. 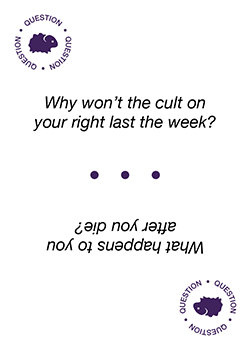 He keeps the card and waits to hear from the cultists.

After the cultists have selected their signs they take a moment to think about how these ideas form the basis of their cult, weaving them together into an introductory story. When all the cultists are ready they take turns sharing their stories, as dramatically as is appropriate, with the other players. As each sign enters the story the cultist reveals that card face up on the table. Cultists do not need to use the exact phrasing on the card.

Jasmine explains her cult: “Friends, do you worry about the environment? We do too! Forests are being chopped down, taking away the precious habitat of timid forest creatures, who will soon have nowhere to hide! But nature will not take kindly to this violation. We have to stop the destruction, before the earth itself rises against humanity! The souls of the trees will form into a mysterious fog, blanketing the denuded forests, concealing the return of angry, homeless squirrels filled with wrath. Lots and lots of wrath. If we cannot save the trees, “furry-ous” vengeance will be visited upon mankind.”

Amber is new to the game and is a bit shy. She simply says “We like Peace and Love, Dancing, and Nudism.” Cultists are free to add a little or a lot of detail to the description of their cult. They can be dramatic or quiet, serious or funny.

Dave stands up and strides back and forth, describing his “Death cult” in a dramatic rant that lasts several minutes. Although he veers off on several tangents, the main thrust of his cult seems to be that we should engage in Voluntary human extinction (and Casual murder, for those who disagree) to save us from suffering Unspeakable horrors. Dave really gets this game.

As a recruit, you are looking for direction to help you decide which cult is right for you. There are no stupid questions, and the cultists have plenty of answers.

After each cultist explains their cult, a recruit reads a question from their card. They can either read the question as it is written, or role play their own character seeking the truth. As a representative of their cult, each cultist in turn answers that question in an effort to convince the recruit to join their cult instead of the others at the table. Cultists use this phase to expand on their own cult and downplay the merits of the other cults. Heckling and crosstalk are encouraged!

Once the cultists have finished, the recruit picks their favorite answer and gives that cultist their question card. That question card represents a new follower who has joined that cult. The recruit then draws a new question card to replace the one they just gave away.

Recruits take turns asking questions and continue until one cultist has gathered at least two recruits.

Is everyone enjoying their time in the cult? You don’t have to follow the rules! Feel free to gather more than two followers if you’re still having fun.

Carl reads out “I’m interested in a long term commitment when it comes to choosing my life’s path. Why won't the cult on your right last the week?”

Jasmine answers: “Our cult is all about long term sustainability. Not only do we protect nature, we enhance it by planting trees on weekends. Amber’s cult of peace and love is focused on short term solutions like dancing and will not be ready for even a tiny bit of wrath. When the squirrels come their cult will fall faster than a clear-cut forest.

Amber retorts: “You wear clothes, part of the consumer culture that leads to the destruction of nature in the first place. With no possessions to worry about, our nudism is an integral part of our long term sustainability plan, and dancing is good exercise without the need for complex gym equipment!”

Jasmine responds “The wrathful squirrels are hungry, and with no clothes for protection you leave your nuts exposed!”

Amber explains how Dave’s neckbearded followers will drop his group the second they catch a glimpse of what peace and love looks like.

Dave explains that we are all doomed anyway. None of us will last the week, especially not the squirrels.

Carl decides that he likes Jasmine’s answer the best, particularly the bit about exposed nuts, so he gives her the question card as a reward.

Jasmine collects two recruits and is declared the winner of this round. She decides that Dave discovers antidepressants and now spends his time collecting wildflowers to give to orphans. Jasmine says that Amber decides to join Jasmine’s cult when she realizes that a lifestyle based on nudism could use a few more trees for privacy.

Between rounds players can change roles so that each player has a chance to be both a cultist and a recruit.

The game ends when it’s time to leave, play a new game, or have pizza.

If you find that one person has won all the rounds, you should probably avoid listening to that person for the rest of the evening.

There is only one true game. Other games are false games and should be cast aside. Pizza is delicious.


Two by two: Teams of two or more players work together to form a cult. Other players ask questions as normal. Teams may answer questions debate style as they vie for the attention and favor of the new recruits.

Cult Lite: Cultists draw 3 cards instead of 5, and choose 2 signs instead of 3. This option can be integrated into a normal game, with some cultists using 3 signs and some using 2, depending on their preference.

Follow the leader: One cultist creates a cult as usual. The next cultist uses that cult, but changes one sign to something from their hand. They may point out ‘They don’t know what they are talking about, the true source of evil isn’t “Casual murder” it’s “Nap time”’.

A festival of followers: Instead of discarding their extra sign and question cards, players give them out as rewards to other players during play for funny, clever, or interesting answers, meta-gaming, or for whatever reason they want. Recruits ask a total of three questions, and all of the extra sign and question cards are added together to determine the winner of the round.

Stadium cults: When playing in very large groups it may not be practical for all recruits to ask a question each round. In this case recruits will collectively ask a maximum of five questions. At the end of the round each recruit gets one vote for their favorite cult.

Have you ever felt like the “Play Variations” at the end of rulebooks are just ideas that they never got around to playtesting?